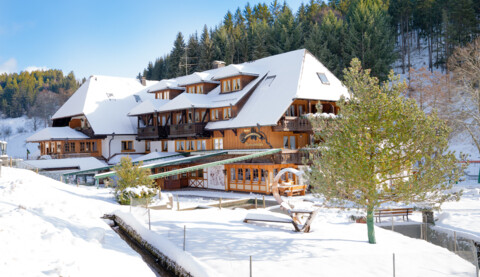 A little journey back in time

At the beginning there was a sleepy little mill in the High Black Forest. Up until the year 1832, the mill was located below the Mettenberg Mountain in the valley. Because of a lack of water, the mill was moved to its current location, it was powered by water and diesel. At this place where the Schlücht, Rötenbach and Rippoldsbach streams come together, there was enough water in order to drive the mill.

During the First World War the Tannenmühle mill building was completely destroyed by fire. That is why the first son of Anna and Friedrich Baschnagel, Josef, was born in Birkendorf at this time. Josef would later join the Benedictine Order in St. Ottilien, where he was ordained a priest. He spent 50 years as a missionary in Tanzania, where he built up a mission station in Ndanda. On the 31st of January 2005, Father Richard (Josef) Baschnagel passed away in St. Ottilien where he spent his retirement.

The son Siegfried Baschnagel operated the mill as master miller up until the year 1954. The mill was also able to generate its own electricity. The operation of the mill was ceased for economic reasons. Fritz Baschnagel took over the Tannenmühle building together with his wife Hildegard, who he married in 1956. They had three children, daughter Conny and the sons Guido and Georg.

The first ponds for the trout farm were created in 1961, which have been constantly expanded right up until today. The first trout eggs were hatched and raised in 1963. Since that time, trout have been raised in the Hotel Tannenmühle in the it's own fish ponds. The habitat of the trout was separated into various sizes in accordance with biological criteria. The best conditions for successful breeding of the fish is provided by the water which is rich in oxygen and that only warms very little even in the summer. Our trout specialities, which are prepared in a variety of ways, have an excellent reputation that goes across the border to Switzerland and well beyond as well. The freshness of the trout and the incomparable selection of different types of preparation are unique in the region.

The guest rooms in Hotel Tannenmühle were renovated in 1962. The showers were lovingly equipped by Siegfried Baschnagel.

The demands in the bar and restaurant business grew constantly, so-much-so, that reconstruction measures were required in 1972. The old farm building was torn down. The large kitchen was installed and the first chef was hired. The guest rooms were also expanded and modernised. Where cows, pigs and hens had been at home for many years, they had to make way for large refrigerators and pantries. A modern hotel and restaurant business was created.

Also in the years that followed, Fritz Baschnagel remained infected with the construction bug. The St. Lawrence Chapel was built on the raised ground opposite the Hotel Tannenmühle and consecrated in the presence of a large number of guests in1982/83. A lot of cooks and chefs from the region were there because Saint Lawrence is the patron saint of cooks.

In 1986 the mill and equipment museum [Mühlen– und Gerätemuseum] followed, the building was rebuilt in accordance with the old plans of the former mill. Today it is a wonderful place to visit and takes its many visitors back to earlier, simpler times. The mill was built in accordance with old construction practices completely without the use of metal nails and all equipment also corresponds to exactly how it was 100 years ago.

The building "Haus Laurentius" was built in 1990/93, and today it contains holiday apartments. The Hotel Tannenmühle was passed on to Guido and his wife Erika in 1995. They married in November 1983, after Guido had passed his master chef examination with the Chamber of Industry and Commerce Hochrhein Bodensee in the spring of the same year. They have three children Linda, Lorenz and Lukas.

In 2004/5, our cosy parlour, which allowed us to get started in the gastronomy trade was renovated and turned into an office with reception. At the same time, the sanitary facilities were modernized, the scullery was expanded and the restaurant was expanded again further.

The unique and idyllic Hotel & Restaurant Tannenmühle is located in the romantic Schlüchttal valley in the Southern Black Forest Nature Park Naturpark Südschwarzwald.

You will enjoy the tranquility and the seclusion of the valley in comfortable rooms and lounges in Hotel Schlüchtmühle.

In the various cosily furnished restaurants, you can enjoy regional dishes as well as our 30 trout dishes from our very own trout farm.

To the trout menu

We only use technical and statistical cookies to improve our services. In the course of this, only anonymized data is recorded, which is used for access analysis and not for advertising purposes.